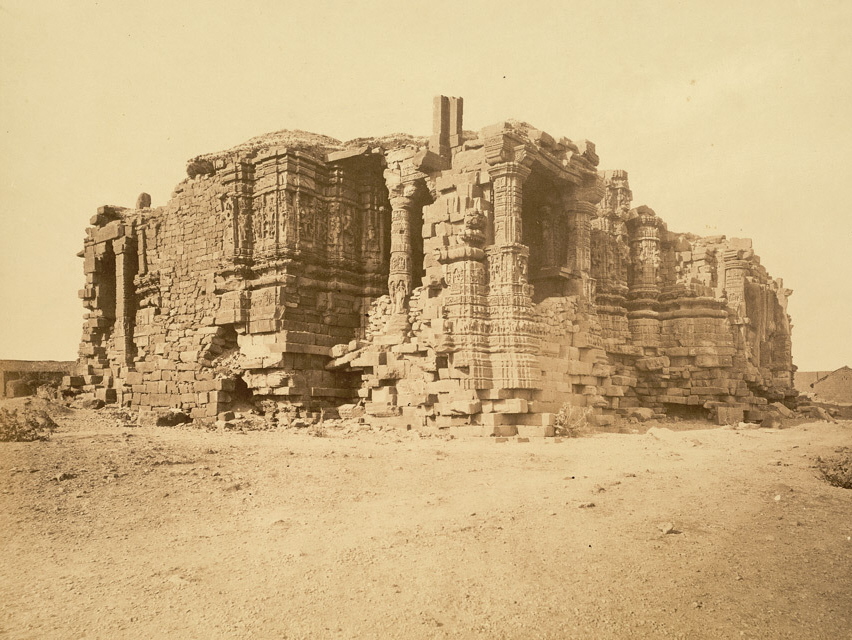 Somnath was famous then, as a great Shiva shrine described in detail in the Skanda Purana of the 9th century A.D. and also mentioned by Al-Beruni both as a sacred place and a resort of pirates. The expedition of Somnath was the crowning event in the idol – breaking and plundering career of Mahmud of Ghazni a Turkish ruler.

The location of Somanatha was earlier referred to as Prathasa Pattana, a well known Tirtha or place of pilgrimage in Saurashtra. It is situated on the west coast of Kathiawar and is at present under Junagadh. It was associated with the nearby confluence of three rivers and it adjoined the port of Veraval.

Mahmud of Ghazni plundered the Somanath temple and there are multiple versions of the event in Turko-Persian sources. Al-Beruni writes that the temple was built of stone and ‘constructed about 100 years prior to Mahmud’s attack (which would date it to the 10th century) that it was set in a fortress surrounded by the sea on 3 sides – presumably; its wealth had to be guarded. Al-Beruni states that the upper part of the icon was broken at the orders of Mahmud and parts of it were taken back as look to Ghazni and placed so that people would walk on it. Mahmud’s raids caused economic devastation and the Turks were hated among the people who suffered because of these raids.

Mahmud began series of seventeen invasions into northwestern India at the end of the 10th century his 16th expedition was the plunder of Somnath temple (dedicated to Shiva) in 1025 A.D. the Somnath temple is one of the twelve Jyotirlings (golden Lingas) symbols of the god Shiva. Somnath mean “the protector of moon god”. It is known as the “shrine external” as although the temple has been destroyed six times it has been rebuilt every single time.

The Pratihara king Nagabhata II constructed the 3rd temple in 815 A.D. the temple was built upon 56 pillars of wood covered with lead. The idol itself was in a chamber and was 5 cubits in height and 3 in girth and must have been cults hidden in the basement. It had not appearance of having been sculptured. Mahmud attacked this temple in 1025 A.D., and looted its gems and precious stones. He then massacred the worshippers and had the temple burnt. It was then that the famous Shiva lingam of the temple was entirely destroyed. The temple and citadel were sacked and its defenders massacred; Mahmud personally hammered the temple’s gilded lingam to pieces and the stone fragments were carted back to Ghazni, where they were incorporated into the steps of the Jama Masjid. The worth of the plunder exceeded two million dinars and the number of the slain exceeded fifty thousands.