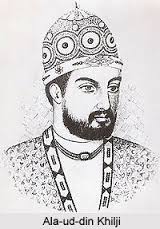 Alauddin was born in A.D.1266.  His early name was Ali Gurshap.  His father, Shihabuddin Masud, was the brother of sultan Jalaluddin Firoz Khalji.  Alauddin Khalji was brought up by his uncle Jalaluddin due to premature and sudden death of Shihabuddin.  The early difficulties of Alauddin was the capture of the throne of Delhi after the bloody murder of his uncle.

Alauddin Khalji holds a very significant place among the sultans of Delhi.  During his region the supremacy of Khaljis was established in entire India. Alauddin Khalji was not only a competent general, a worthy conqueror and a great warrior, but was also an administrative par excellence.  He took personal interest in Administration, prepared guidelines and executed his scheme efficiently.

Sultan Alauddin Khalji established a strong central government during his reign in which the sultan was the head of the administration.  All executive, legislative and judicial power were centered in the hands of sultan and he had a supreme power in all the three departments.

The reign of Alauddin Khalji is considered significant due to his military reforms. He maintained a powerful army at the center so that the revolts could be crushed at the outset and the Mongol invasion could be repulsed effectively. Bodyguards were appointed by the sultan himself and they remained under his direct control. He was the first Muslim ruler who introduced significant rules to improve the standard of army and to make it powerful disciplined and well-organised.  The sultan enhanced the number of his soldiers.  Ferishta also remarks, “He raised an army of 4,75,000.  The army consisted chiefly of cavalry, infantry and elephants, but the chief strength of the army lay in cavalry”.

Besides cavalry, elephants were also used in war.  Swords, bows, maces, arrows, battle-axes and daggers were the significant weapons which were used at the time of war.  The use of catapults was also in vague. He introduced hulia of each soldier and dag.  It was done to check the forgery of the nobles and the soldiers. The military reforms of Alauddin proved fruitfully but there was no originality in them.  He merely followed the policy of Balbun, executing in his own way, and there by achieving success.

His economic reforms were motivated by the following factors

The Hindu Emperors and the Muslim Sultans who ruled prior to Alauddin Khalji had given huge land grants to the nobles’ ad Imam or Waqf and no tax was realized for such lands.  By a stroke of pen Alauddin abolished these grants and confiscated all such landed property.

Cancellation of the Privileges of Revenue Officers

Alauddin by order abolished the privileges and rights of the kuts, Muquddam , Chaudharis and Patwaris, all revenue officers. Now they all were able to extract commission out of the revenue of the sultanate and they were forced to pay Khiraj and other taxes like other peasants.

In order to enrich the royal treasury and to weaken the power of the opponents, the sultan increased taxes.  He imposed heavy taxes especially on Hindus on social, economic and religious point of view. Jaziya was imposed other taxes on Hindus and enhanced its rate to a great extent.

Alauddin ordered for the measurement of the whole land on the basis of standard yields and ‘biswa’ was declared to be the standard unit of measurement. Kari was one of the taxes

In order to collect the land revenue a number of officers were appointed.  A new department called Diwan-i-Mustakraj was created.

The sultan increased the salaries of the revenue officers in order to check bribery and corruption.  He always kept a close eye on the activities ad punished them severely in case of corruption of embezzlement.

The aim was to rise the income of the sultanate so that the increased expenditure could be met easily and the second was to root out the possibility of revolts.

Historians have praised Alauddin Khalji for the price control and the market regulation policy.  To control the price of daily commodities was a unique effort of a contemporary epoch; hence the sultan rightly deserved the praise of contemporary historians.

2)  Along with territorial expansion, the administrative expenditure has enhanced a lot.  The sultan wanted to lessen the financial burden, so he resorted to the policy of price control.

Fixation of price of daily commodities

Alauddin got prepared a list of articles of daily use and fixed the price of all the things in the market.  Besides the eatable articles, the rates of slaves and cattle was also fixed.

The entire responsibility of market control was bestowed on Diwan-i-Riyasat. Amir Yakut a confident sultan was appointed on this post.

Diwan-i-Riyasat made separate arrangements and separate Shahna-i-mandi were appointed for every market.

The sultan tried to solve the problem rampant in different markets.  He divided the traders into chiefly two parts.

Several officials were appointed by the sultan to check the dishonesty of the traders and spies were also always remained alert in this regard.  They used to make secret enquires in the market in the case of any cheating by the merchants, than the sultan was informed immediately.

Rationing system was a wonderful achievement of Alauddin in the 14th century.  Whenever there was a famine or a draught in the sultanate, Alauddin introduced the system of rationing.

Merits of the system

As the result of the market system Alauddin could maintain a strong and vast army.

Habits were so disciplined that crime was considerably lessened.

As sever punishments were given for minor offence, the scope of black-marketing and fraud was minimized and people dare not act contrary to the rules of the sultan.

People felt quiet relieved and pleased due to availability of cheap things in the market.

Demerits of the system

The market system was not liked by the Hindus.

These reforms were not motivated by a sense of public welfare.

It harmed the trade in the sultanate as the margin of profit was brought down to a very low level.

The enhancement in the rate of revenue and imposition of other taxes compelled the farmers to withdraw their attention from agriculture.

But owning to a stern policy of Alauddin, the market control system ended with his life as his successors were neither capable of handling it nor did they need it.