Defining artistic style is one of the key elements of art historical inquiry, although the analysis of artworks solely in terms of style no longer dominates the field the way it once did. Art historians speak of several different kinds of artistic styles. Period style refers to the characteristic artistic manner of a specific time, usually within a distinct culture, such as “Archaic Greek.” But many periods do not display any stylistic unity at all. How would someone define the artistic style of the second decade of the new millennium in North America? Far too many crosscurrents exist in contemporary art for anyone to describe a period style of the early 21st century— even in a single city such as New York.

Regional style is the term art historians use to describe variations in style tied to geography. Like an object’s date, its provenance, or place of origin, can significantly determine its character. Very often two artworks from the same place made centuries apart are more similar than contemporaneous works from two different regions. To cite one example, usually only an expert can distinguish between an Egyptian statue carved in 2500 bce and one made in 500 bce. But no one would mistake an Egyptian statue of 500 bce for one of the same date made in Greece or Mexico. 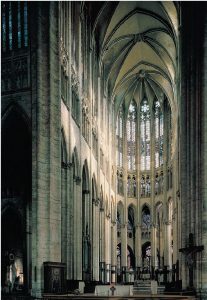 Considerable variations in a given area’s style are possible, however, even during a single historical period. In late medieval Europe, French architecture differed significantly from Italian architecture. The interiors of (fig – 1) and the church of Santa Croce (fig – 2) in Florence typify the architectural styles of France and Italy, respectively, at the end of the 13th century. The rebuilding
of the east end of Beauvais Cathedral began in 1284. 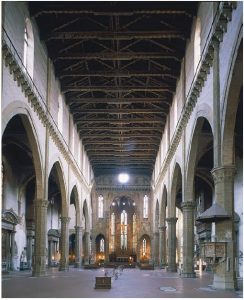 characteristic of this era, yet the two churches differ strikingly. The French church has towering stone ceilings and large expanses of colored-glass windows, whereas the Italian building has a low timber roof and small, widely separated windows. Because the two contemporaneous churches served similar purposes, regional style mainly explains their differing appearance.

Personal style, the distinctive manner of individual artists or architects, often decisively explains stylistic discrepancies among monuments of the same time and place. In 1930, GeorGia o’Keeffe (1887–1986) painted Jack-in-the-Pulpit No. 4 (fig. I-5), a sharply focused close-up view of petals and 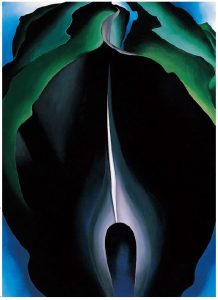 leaves. O’Keeffe captured the growing plant’s slow, controlled motion while converting the plant into a powerful abstract composition of lines, shapes, and colors (see the discussion of art historical vocabulary in the next section). Only a year later, another American artist, ben Shahn (1898–1969), painted The Passion of Sacco and Vanzetti (fig. I-6), a stinging commentary on social injustice inspired by the trial 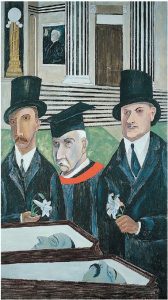 and execution of two Italian anarchists, Nicola Sacco and Bartolomeo Vanzetti. Many people believed Sacco and Vanzetti had been unjustly convicted of killing two men in a robbery in 1920. Shahn’s painting compresses time in a symbolic representation of the trial and its aftermath. The two executed men lie in their coffins. Presiding over them are the three members of the commission (headed by a college president wearing academic cap and gown) who declared the original trial fair and cleared the way for the executions. Behind, on the wall of a stately government building, hangs the framed portrait of the judge who pronounced the initial sentence. Personal style, not period or regional style, sets Shahn’s canvas apart from O’Keeffe’s. The contrast is extreme here because of the very different subjects the artists chose. But even when two artists depict the same subject, the results can vary widely. The way O’Keeffe painted flowers and the way Shahn painted faces are distinctive and unlike the styles of their contemporaries. (See the “Who Made It?” discussion.)

The different kinds of artistic styles are not mutually exclusive. For example, an artist’s personal style may change dramatically during a long career. Art historians then must distinguish among the different period styles of a particular artist, such as the “Blue Period” and the “Cubist Period” of the prolific 20th-century artist Pablo Picasso.

Architecture, Arts, History
« Interpreting Picture Edits and Film Conventions through Sound Art Through Ages – what is its subject? »

One thought on “Art through Ages – Art style”