Being the biggest continent in the world, Asia includes 50 independent countries and occupies the eastern part of the single Eurasian landmass. 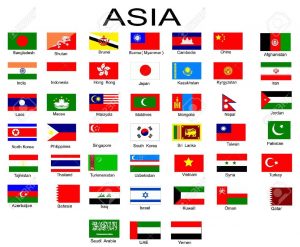 The Mediterranean Sea and Black Sea separate Asia from Europe, farther the overland border runs through the Caucasus Mountains, the Caspian Sea, the Ural River and Ural Mountains.

This boundary crosses through the territory of Russia, Kazakhstan, Azerbaijan, Georgia and Turkey, so these states are in both continents.  Armenia and Cyprus geographically are in Asia, but politically and culturally they also are considered as a part of Europe.

The largest of the Asian countries by area is Russia, which occupies about 30% of the total territory of the continent. The smallest one of the independent states is the Maldives,  it is an archipelago of islands famous for its beach resorts.

The most visited by tourists country in this region is China as a huge cultural center, followed by no less popular destinations like India, Thailand, Malaysia, Turkey.

South Asia or Southern Asia (also known as the Indian subcontinent) is a term used to represent the southern region of the Asian continent, which comprises the sub-Himalayan SAARC countries and, for some authorities, adjoining countries to the west and east. Topographically, it is dominated by the Indian Plate, which rises above sea level as Nepal and northern parts of India situated south of the Himalayas and the Hindu Kush.

South Asia is bounded on the south by the Indian Ocean and on land (clockwise, from west) by West Asia, Central Asia, East Asia, and Southeast Asia.

The current territories of Afghanistan, Bangladesh, Bhutan, Maldives, Nepal, India, Pakistan, and Sri Lanka form South Asia.  The South Asian Association for Regional Cooperation (SAARC) is an economic cooperation organization in the region which was established in 1985 and includes all eight nations comprising South Asia.

South Asia covers about 5.2 million km2 (2 million mi2), which is 11.71% of the Asian continent or 3.5% of the world’s land surface area.  The population of South Asia is about 1.749 billion or about one fourth of the world’s population, making it both the most populous and the most densely populated geographical region in the world.

Overall, it accounts for about 39.49% of Asia’s population, over 24% of the world’s population, and is home to a vast array of peoples.

United   Nations cartographic map of South Asia.   However, the United Nations does not endorse any definitions or area boundaries.

The total area of South Asia and its geographical extent is not clear cut as systemic and foreign policy orientations of its constituents are quite asymmetrical. Aside from the central region of South Asia, formerly part of the British Empire, there is a high degree of variation as to which other countries are included in South Asia.

Modern definitions of South Asia are consistent in including Afghanistan, India, Pakistan, Bangladesh, Sri Lanka, Nepal, Bhutan and Maldives as the constituent countries.

Myanmar is included by some scholars in South Asia, but in Southeast Asia by others.  Some do not include Afghanistan, others question whether Afghanistan should be considered a part of South Asia or the Middle East.

The current territories of Bangladesh, India, and Pakistan, which were the core of the British Empire from 1857 to 1947, form the central region of South Asia, in addition to Afghanistan,] which was a British protectorate until 1919, after the Afghans lost to the British in the Second Anglo-Afghan war. The mountain countries of Nepal and Bhutan, and the island countries of Sri Lanka and Maldives are generally included as well.

Myanmar (formerly Burma) is often added, and by various deviating definitions based on often substantially different reasons, the British Indian Ocean Territory and the Tibet Autonomous Region are included as well.

The common concept of South Asia is largely inherited from the administrative boundaries of the British Raj, with several exceptions. The Aden Colony, British Somaliland and Singapore, though administered at various times under the Raj, have not been proposed as any part of South Asia.

Additionally Burma was administered as part of the Raj until 1937, but is now considered a part of Southeast Asia and is a member state of ASEAN. The 562 princely states that were protected by but not directly ruled by the Raj became administrative parts of South Asia upon joining Union of India or Dominion of Pakistan. Geopolitically, it had formed the whole territory of Greater India.

The South Asian Association for Regional Cooperation (SAARC), a contiguous block of countries, started in 1985 with seven countries – Bangladesh, Bhutan, India, the Maldives, Nepal, Pakistan and Sri Lanka – and added Afghanistan as an eighth member in 2007.

China and Myanmar have also applied for the status of full members of SAARC.  This bloc  of countries include two independent countries that were not part of the British Raj – Nepal, and Bhutan.

Afghanistan was a British protectorate from 1878 until 1919, after the Afghans lost to the British in the Second Anglo-Afghan war. The World Fact book, based on geo-politics, people, and economy defines South Asia as comprising Afghanistan, Bangladesh, Bhutan, British Indian Ocean Territory, India, Maldives, Nepal, Pakistan, and Sri Lanka.

The South Asia Free Trade Agreement incorporated Afghanistan in 2011, and the World Bank grouping of countries in the region also includes all eight members comprising South Asia and SAARC as well, and the same goes for the United Nations Children’s Fund (UNICEF).

When the Centre for South Asian Studies at the University of Cambridge was established, in 1964, it promoted the study of India, Pakistan, Sri Lanka, Bangladesh, Afghanistan, the Himalayan Kingdoms (Nepal, Bhutan, and Sikkim, and Burma (now Myanmar).

It has since included Thailand, Malaysia, Singapore, Vietnam, Cambodia, Laos, Indonesia, the Philippines and Hong Kong.

The South Asian Studies Program of Rutgers University and the University of California, Berkeley Centre for South Asia Studies also include the Maldives.

The United Nations Statistics Division’s scheme of sub- regions include all eight members of the SAARC as part of Southern Asia, along with Iran only for statistical purposes. Population Information Network (POPIN) includes Afghanistan, Bangladesh, Burma, India, Nepal, Pakistan and Sri Lanka as part of South Asia.

Maldives, in view of its characteristics, was admitted as a member Pacific POPIN   sub regional   network only in principle. The Hirschman– Herfindahl index of the United Nations Economic and Social Commission for Asia and the Pacific for the region includes only the original seven signatories of SAARC.

was also found to be significantly low among respondents in an older two-year survey across Bangladesh, India, Nepal, Pakistan, and Sri Lanka.  However, modern The British Indian Ocean Territory is connected to the region by a publication of Jane’s for security considerations. The region may also include the disputed territory of Aksai Chin, which was part of the British Indian princely state of Jammu and Kashmir, but is now administered as part of the Chinese autonomous region of Xinjiang.

The inclusion of Myanmar in South Asia is without consensus, with many considering it a part of Southeast Asia and others including it within South Asia. Afghanistan was of importance to the British colonial empire, especially after the Second Anglo-Afghan War over 1878–1880.

Afghanistan remained a British protectorate until 1919, when a treaty with Vladimir Lenin included the granting of independence to Afghanistan. Following India’s partition, Afghanistan has generally been included in South Asia, with some considering it a part of Southwest Asia.

During the Soviet war in Afghanistan (1979–1989) American foreign policy considered Pakistan and Afghanistan in Southwest Asia, while others included it as a part of South Asia.  There is no universal agreement among scholars on which countries should be included within South Asia.

In the past, a lack of a coherent definition for South Asia resulted in not only a lack of academic studies, but also in a lack interest for such studies.  The confusion existed also because of the lack of a clear boundary – geographically, geopolitical, socio-culturally, economically or historically – between South Asia and other parts of Asia, especially the Middle East and Southeast Asia.

Identification with a South Asian identity definitions of South Asia are very consistent in including Afghanistan, India, Pakistan, Bangladesh, Sri Lanka, Nepal, Bhutan and Maldives as the constituent countries. 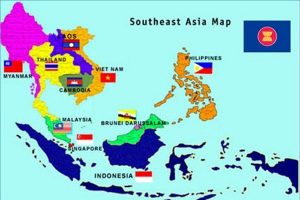 Southeast Asia or Southeastern Asia is a sub region of Asia, consisting of the countries that are geographically south of China, east of India, west of New Guinea and north of Australia.  Southeast Asia is bordered to the north by East Asia, to the west by South Asia and Bay of Bengal, to the east by Oceania and Pacific Ocean, and to the south by Australia and Indian Ocean. The region is the only part of Asia that lies partly within the Southern Hemisphere, although the majority of it is in the Northern Hemisphere. In contemporary definition, Southeast Asia consists of two geographic regions:

The region lies near the intersection of geological plates, with heavy seismic and volcanic activities. The Sunda Plate is the main plate of the region, features almost all Southeast Asian countries except Myanmar, northern Thailand, northern Vietnam, and northern Luzon of the Philippines.

The mountain ranges in Myanmar, Thailand, and peninsular Malaysia are part of the Alpide   belt, while the islands of the Philippines are part of the Pacific Ring of Fire. Both seismic belts meet in Indonesia, causing the region to have relatively high occurrences of earthquakes and volcanic eruptions.

Southeast Asia covers about 4.5 million km2 (1.7 million mi2), which is 10.5% of Asia or 3% of earth’s total land area. Its total population is more than 641 million, about 8.5% of world’s population. It is the third most populous geographical region in the world after South Asia and East Asia.

The region is culturally and ethnically diverse, with hundreds of languages spoken by different ethnic groups.  Ten countries in the region are members of ASEAN, a regional organization established for economic, political, military, educational and cultural integration amongst its members.