How economists define ‘development’ has long been a source of debate and discussion. For the oil producers of the region, the traditional definition of growth in per capita gross national income has always been of limited value. First, because as a mean average it takes no account of income distribution which is particularly relevant where large oil revenues accrue to the state. Second, because as an exhaustible resource, the oil element of ‘income’ can be viewed as a liquidation of assets. In such a context, wider development definitions to do with standard and quality of life take on even greater significance.

At the risk of pre-empting the discussion in this section, the record of development in the Arab world has been poor. The recent joint report by the UNDP and the Arab Fund for Economic and Social Development – the Arab Human Development Report 2002, presents a damning condemnation of development progress in the Arab world. The headings of the overview tell it all. Thus the central section is on ‘Aspirations for freedom and democracy remain unfulfilled’ and contains four sections – ‘Development not engendered is endangered’; ‘bridled minds, shackled potential’; ‘as development management stumbles, economies falter’; and finally ‘the curse of poverty: denying choices and opportunities, degrading lives’.

The relevance of the last two paragraphs can be seen in below figure. 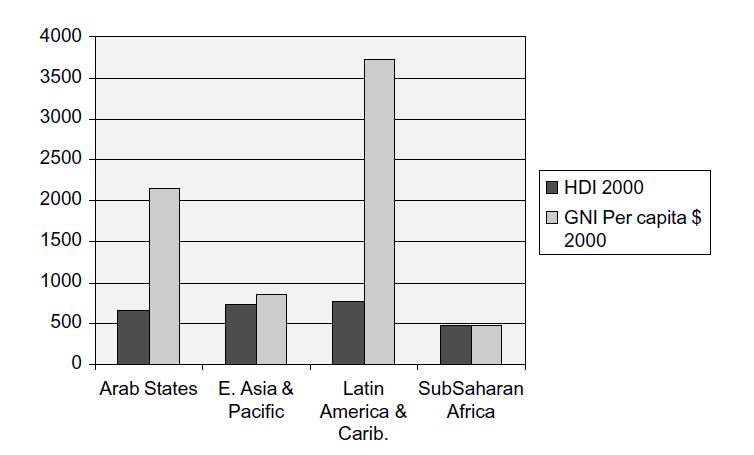 Thus the relatively higher per capita income in the Arab world has not translated into a creditable performance as measured by the UNDP’s Human Development Index. The comparison is particularly noticeable in relation to the east Asia and Pacific region. To some degree this failure in the region can be attributed to the impact of the oil sector but the nature of the transmission mechanism from oil to development failure can be difficult to disentangle. Furthermore, it is dangerous to assert that the poor development record is entirely the result of oil revenues. As the introduction suggested, other complex political and economic factors have been at work. For example, a major source of economic failure in the region has been the weakness of the private sector. To some extent this was the legacy of revolutionary change in governments whereby the new ruling elites, generally from a military background, had to destroy the political power of the old elites. The most obvious method was to destroy their economic power. Thereafter, in the best traditions of predatory states, economic power was vested exclusively in the state via its ruling elite, to the exclusion of others. Thus what follows is only part of a very complex story.

An aspect which must be emphasized is the crucial importance of oil and gas exports throughout the region. There is a tendency to focus attention only on the regional OPEC members but the majority of other Arab countries are also highly dependent upon oil export revenues. Such countries include Egypt, Syria, Oman, Yemen and Bahrain. The picture is graphically illustrated in figure.

Iraq is excluded for lack of data but effectively the majority of Iraqi merchandise exports since the 1980s have consisted of oil and oil products adding it to the list of oil dependent countries of the region. This section attempts to consider the impact of oil on development in the region in terms of three factors – oil revenue impacts, the forward linkages from the oil sector to the rest of the economy and the backward linkages from the sector.