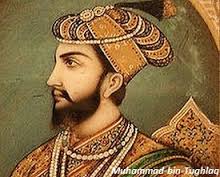 The foundation of Tughluq dynasty was laid by Ghazi Tughluq or Ghazi Malik Who after his accession in September, A. D. 1320 assumed the title of Ghiasuddin Tughluq Shah.  The word ‘Tughluq’ is of very obscure origin, it did not indicate the name of any clan or tribe.

Significance of the Reign of Muhammad-bin-Tughluq

Sultan Muhammad-bin-Tughluq holds a specific place in history of Medieval India.  His reign is significant from several points of view.  During his reign the direct rule of Delhi sultanate was established in most of the south and it was the zenith of his career from the point of view of territorial expansion. None of the Sultans possessed so many of the virtues and merits as sultan Mohammad-bin-Tughluq did. After his coronation the sultan laid out some of the ambitious plans and executed them.

Causes of Increase in Tax

(1) In the distribution of rewards, titles and charity, the sultan had given away a lot of money at the time of his coronation which affected the royal treasury.

(2)  The region of Doab was quiet a fertile and the people led a prosperous life.  The sultan had an idea that people of the Doab would be in a position to pay the increased tax easily.

(3)  Mostly, the Hindus lived in this area of Doab, who often revolted and conspired against the authority of Delhi sultanate.

The Result of Increase

(1)  The increase in Taxes harmed the peasantry very much and they opposed it vehemently.

(2)  The corrupt officers realized the taxes beyond the limit of increase.  It generated rebellious feelings among the people.

(3)  The revenue officers ignored he circumstances of the Doab and tried to realize the increased tax by ‘blood and iron’ policy which enraged.

The sultan was a great well-wisher of his people.  He was ignorant of the condition of the people of the Doab but as soon as he was acquainted with the famine and drought, he withdrew the ordinance and adopted the relief measures for the good of peasantry.

Muhammad-bin-Tughlaq, realizing the need for the progress and development in agriculture, established a new department called Diwan-i-Kohi (Agriculture Department).  The main purpose of this department was to improve the agriculture produce by providing facilities to the peasants.

The scheme of the transfer of capital from Delhi to Deogiri was another significant plan of Muhammad-bin-Tughlaq.  Deogiri was renamed as Daulatabad.

Causes of Transfer of Capital

(1) By now the territory of Delhi had increased much and it was not possible to control the entire region from Delhi.  Since Daulatabad was situated in the middle of the sultanate, the issue of transfer was taken up by the sultan.

(2)  The tributary rules of the Deccan were rebellious and they often not only revolted against the Delhi sultanate but also refused to pay annual tributes.

(3)  Sultan wanted to make Daulatabad a prosperous town and a centre of Muslim culture, hence he took decision to make it the capital.

Having decided for the transfer of capital, than sultan ordered all the people to migrate to Daulatabad.  The distance between the old and the new capital was about 950 kilometers.  The sultan tried to provide all the possible facilities to the people.  He got the revolt repaired and constructed rest house on the on both the sides of the road, every two-three miles.  The sultan spent a lot of money in the execution of this plan.

But in spite of all the facilities provided by the Sultan, the people of Delhi had so much attachment with the capital, which they did not want to leave Delhi, hence the sultan has to treat them harshly as he wanted to execute his scheme fully.

The long journey from Delhi to Daulatabad proved very painful and a large of people died during the journey.  Realizing this mental strain and tremendous sufferings of the people, Muhammad-bin-Tughlaq realized his fault and ordered the public to return to Delhi, their home town. Again the long and strenuous journey caused several deaths in spite of all the facilities provided to them by the sultan.

Results of Transfer of capital

The effects of Mohammad-bin-Tughlaq’s scheme of transfer of capital proved disastrous.  The sultan spent a lot of wealth for the implementation of this scheme.

The prestige and prosperity of Delhi was divested for a while.

The people of Delhi had to suffer untold miseries and they sustained lots of incontinences as a result of this scheme.  Many perished during the long journey.

Comparatively, the Muslims suffered much because they had to live in the south in an atmosphere entirely different from that of Delhi as the south was mostly Hindu-inhabited region.

The sultan was roundly condemned and critised for the failure of this project.  They not only called him names but also named him as cruel, short-sighted and oppressor of the people.  Some of them went to the extent of calling him a mad Sultan.

But it is a fact that whatever control could be established in the south was because of making Daulatabad the capital.  It added to the prestige of Daulatabad.

The age of Muhammad-bin-Tughluq is considered a very significant epoch in the history of Indian coinage.  He introduced various reforms and improvements in manufacturing, valuation and types of coinage Edward Thomas has aptly called him the ‘Prince of Moneyers’ because of his advanced measures in the field of coinage.  The introduction of token currency was a most significant innovation of Muhammad-bin-Tughlaq in the history of Medieval Indian coinage.

Cause of issue of Token Currency

From the very date of his accession sultan Muhammad-bin-Tughlaq spent a lot of money for giving rewards, grants, charity and gifts.  Besides, he devised some significant schemes and spent a huge amount on their execution.

The sultan needed extra wealth for the execution of his other projects and for suppressing the revolts in the future; hence, it became inevitable for him to issue token currency. Ishwar Topa and others are of the opinion that the shortage of sliver was the root cause of the issue of token currency.

Sultan Muhammad-bin-Tughlaq who was a man of fertile minds was fond of devising new scheme and introducing them.  The scheme of token currency was also a product of his fertile mind.

Causes of Failure of the Scheme

(1) The people of the fourteenth century failed to understand the utility of token currency which scheme are much in advance of their times.

(2) Muhammad-bin-Tughlaq failed to take steps to make the mint the monopoly of the state nor could he be successful in getting standard coins struck.  Hence everybody made artificial coins and thus led the scheme towards failure.

(3)  Elphinstone writes that unstable government and bankruptcy of the sultan was also a significant cause of the failure of his scheme of token currency.  But this view does not seem worthwhile.

(4)  The sultan had no patience at all.  He wanted immediate positive results and the failures distributed his do much that he rejected the schemes altogether.  Thus haste and impatience of the sultan was also the root cause of the failure of his various projects.

Criticism of the project

It was an original and a new scheme and planned by sultan.  Its aim was not to befool the people but to seek the prosperity of the kingdom and to ensure public welfare.  The way of issuing bronze coins is not doubtful but unfortunately the people of the fourteenth century failed to understand its significance and for him the main scheme ended in smoke.  Wrong implementation of the scheme was the main cause of its failure.

Muhammad Tughlaq was a very learned, logical and worthy ruler.  He has originality in his wisdom but he believed in making the experiments in every sphere.  So he introduced various reforms in the administrative system of Delhi sultanate.

Muhammad Tughlaq made himself an autocratic deposit lies on the rulers of the Delhi sultanate but his aim was to do good to the people and not to oppress them.  He has no faith in his worthy nobles.  He believed in equality and discarded the privileges of the nobles.

Judicial Reforms and the Charity System

Muhammad Tughlaq was also famous for his justice endeavored his beat to improve the administration of justice.  He himself the fountainhead of justice and considered everybody equal before law.  He never hesitated in awarding severe punishment to anyone who was found guilty.  Cutting off limbs, tortures and death sentences were very common punishments.

The charity of Muhammad Tughlaq deserves special mention established a separate department for charity and spent million rupees annually.  He got solace by helping the poor and the needy.

In the Delhi Sultanate, he was the first ruler who was liberty tolerant in his religious attitude, so the credit of establishing a same kingdom in India goes to him.

Muhammad Tughlaq adopted a liberal and tolerant policy towards the Hindus.  His attitude was quiet liberal towards the religion of the majority of people and according to Ibn Batuta, he appointed them on significant posts.

Development of Education, Literature and Arts

Muhammad Tughlaq was a great scholar of Persian, a true devotee of literature, a just critic and an impressive orator.  He was an accomplished poet, quiet at home in logic, astronomy, mathematics, philosophy and physical sciences. As a pet he was adept in the use of similes and metaphors”.  He was called the Aristotle of his age.  He provided patronage to scholars and men of letters and various persons of extraordinary wisdom an intellect adorned his court.  Barani and Ibn Batuta were the scholarly figures of his court.  He gave liberal rewards to the poets on their works.  Hence education and literature flourished during his reign.

Sultan Muhammad Tughlaq was also a patron of various arts.  He had great interest in architecture.  He constructed some buildings in Delhi.  A big mosque was also constructed by him.  He repaired Shamsi mosque of Badaun.  He founded a new town, Jahanpanah, near Delhi.  Several other buildings were also constructed there.  Ahmad Ayaz, the Engineer of Buildings, cooperated with him in the construction of these buildings.

Muhammad-bin-Tughlaq was a great conqueror and a great successful general.  Owing to his high ambitions he wanted to establish his control over the entire India.  Besides the Northern provinces, he conquered the southern provinces like Malbar, Warangal and Dwarasamudra.

Muhammad-bin-Tughlaq was a great administrative genius. As a ruler he was devoted to his duties.  He was not a man of narrow tendencies. He allowed everybody to get an appointment in any post in the empire on his merit without any distinction of caste and creed.  His attitude towards the Hindus was tolerant in the beginning.